Born to Kimberly and Waverly Watkins Sr., twins Waverly and Warner Watkins have been attached at the hip since birth. The brothers were raised in Danville, Virginia and played sports growing up. Warner took up wrestling while Waverly spent time on the basketball court. After graduating from George Washington High School, the brothers attended Morehouse College in Atlanta, Georgia (their father’s alma mater) and found a new passion in fashion. 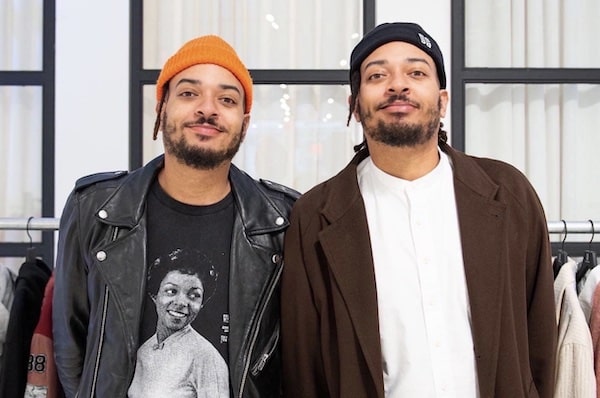 The Twins Discover Their Love of Fashion

The two liked their first year in Atlanta so much that they decided to stay over the summer after their freshman year and began looking for summer jobs. A mutual friend of the brothers worked at a local sneaker boutique and told them they needed to work at a boutique to really sell products. They took that advice and got so a job at the boutique, Wish Atlanta, in order to fuel their creative interest.

They were then offered the opportunity to travel to New York City for an internship that introduced them to the ins and outs and behind the scenes insights about the fashion world from showrooms to photo shoots. Warner said, “We were in New York City and seeing how streetwear brands that we loved were making wool cardigans, and that always intrigued us that we could do more than just a t-shirt.” While Atlanta was known for screen printed t-shirts and hoodies, the twins wanted to take their streetwear to another level and do something deeper than screen printed shirts.

Back at Morehouse, the brothers were not majoring in fashion so they had to come up with a plan to fuel this new interest. They realized they wanted to make their own clothing brand and had to figure out how to make that desire a reality. After graduating from Morehouse, they moved to Los Angeles, long considered a Mecca for the clothing industry, and realized the Japanese fabrics they were searching for were located in the city.

The Twins Create Their First Collection

Four years ago, Waverly and Warner created their first collection under the name Brownstone which is a menswear brand offering mixed wear pieces. The name was inspired by their interest in New York City brownstones. They were even playing with the concept of all of their ideas being housed in one brand. According to Warner, “All of our varied ideas can sit under this one house, whether we’re making mohair cardigans or leather jackets that reference post punk. Anything we do can sit under the house of Brownstone because it all comes from the same thought and emotion.”

Their aim was to grow their market and fashion landscape while putting heavy emphasis on quality products and sourcing materials with a very tight team behind them. Warner said, “All of our pieces are made in America, and they all come from Japanese fabric with the exception of the Mohairs, which comes from Italy. So there’s no slouch in it. We have to not only maintain that quality but supersede it.”

As they launched their brand, they decided to go full circle and began partnering with boutiques such as Union in Los Angeles and A Ma Maniere in Atlanta. Brownstone recently released its fifth collection, called Black Space, in conjunction with Nordstrom, to kick off their Spring 2021 collection. Also Brownstone was chosen by Matthew Henson – known for styling artists A$AP Rocky and The Weekend – as an ambassador brand for part of a specially curated collection to be housed at locations for the department store chain. For their collection with Nordstrom, the brothers went back home to Danville, VA and created a small capsule collection during the pandemic. For the brothers, going back to Danville fueled their creativity and helped with time management. “I love to go back to Danville and kick it at our parent’s crib, because we get creative again,” Waverly said.

By the way the twin brothers tell it, having their brand in such a mainstream store is “crazy” since their brand has always been kind of underground. Brownstone is now on a large platform and in front of the world to see. Waverly said, “I feel really comfortable being able to present Brownstone in this light, so at the end of the day, Warner and I will be able to keep making [this]. This collection is just as dope as our first collection…but I believe that continuing to grow and continuing to produce at a high quality level, and that’s something that we strive to do.”

Since they are being featured in a department store, which is quite different from the very niche small boutiques they’re used to, they claim to have no clue exactly who is looking at their clothing. On the other hand, they have an idea of who is both selling and buying their clothing at boutiques. There is no doubt that Brownstone will go international soon as Union stores internationally are being said to carry their upcoming collection. It looks like the best is yet to come for the Watkins twins and Brownstone and the clothes that create which make a fashion statement for those that wear them and feel good in them.