Halston is one of the most famous names in fashion and his style defined the 1970s with simple and sexy dresses and his penchant for Ultrasuede. He was known worldwide as Halston, but he was born Roy Halston Frowick in 1932. Halston was also known for his diverse group of models called the Halstonettes (that often travelled with him). The models reflected Halston’s goal of making clothes for a diverse range of women of all ages. Some of the more well-known Halstonettes were Anjelica Huston and Beverly Johnson. His inclusion of ethnically diverse women on the runway was revolutionary. He was also one of the very first designers to create unisex clothing. 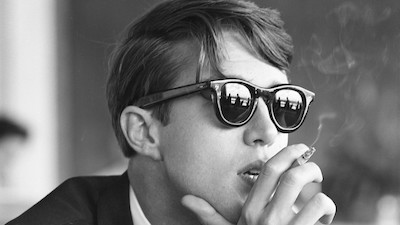 Roy Halston Frowick grew up in Des Moines, Iowa. He attended Indiana University and the Chicago Institute of Art. He first found success as a milliner and opened his own salon at the Ambassador Hotel in Chicago in 1953.

After the success of his Chicago location, he relocated to New York City and worked as a milliner for Lilly Daché, and then moved to Bergdorf Goodman’s millinery salon. His career received a major boost in 1961 when he created the pillbox hat that Jackie Kennedy wore to her husband’s inauguration.

Halston used this new popularity to begin expanding. By 1966, he was designing couture and ready-to-wear accessories including scarves, shoes, jewelry, fur, and leather apparel. His first ready-to-wear collection followed soon after and this collection debuted at Bergdorf Goodman. While it was not a huge hit, the collection showed a good deal of promise.

Halton Moves into the Mainstream

The seventies were the decade of Halston. In 1970, he established Halston International which offered knitwear and accessories. The brand was forged at an accessible price point and was quite successful. Just two years later, he opened a ready to wear business named Halston Originals as well as his first boutique on Madison Avenue.

Major financial gains occurred in 1973 when Halston sold his business to Norton Simon, Inc. for an estimated price between 11-million and 12-million. He remained on board as an executive and the company was renamed Halston Enterprises.

Halston was also part of the famous “Battle of Versailles” in 1973 where he joined American designers Bill Blass, Oscar de la Renta, and Anne Klein to show their designs against top French designers. The fashion competition was a fundraiser for the restoration of the palace at Versailles. The show was representative of American sportswear at its finest and was influential in terms of diversity and inclusion in modeling as ten black models were showcased on the runway.

Halston’s designs were extremely popular in the 1970s and 1980s. He was known for popularizing Ultrasuede which he used to create jackets and sleek shirtdresses. He truly embraced the idea of dressing a wide range of women and body types. One of his most popular and iconic creations was the Halston halter dress which became a mainstay of the disco era. He expanded into other dress styles over the years including swing dresses, polyester georgette slip dresses and knit jersey dresses flattering to every figure. He also brought the Halston style to workwear. As women began to enter the workforce in increasing numbers, Halston dressed them in sleek skirt suits with asymmetric collars.

Halston was well-known for his luxury lifestyle and high-profile friends as well as his fashion designs. The designer and the Halstonettes were mainstays of the New York City disco scene of the ’70s and ’80s and this was especially true at the iconic Studio 54. Everyone wanted an invite to the chic parties at his Upper East Side townhouse with many of his famous friends in attendance including Liza Minnelli, Bianca Jagger, and Andy Warhol.

Halston continued to grow his fashion empire through licensing deals by expanding into luggage and cosmetics. By 1983, it was estimated that his company had surpassed $150 million dollars in sales.

Even with that success, Halston made a severe miscalculation in 1983 when he created a line of affordably priced clothing for J.C. Penney. Halston and his advisors expected the mainstream line to generate over a billion dollars in its first five years. The advisors did not consider the fallout from high-end retailers. When Bergdorf Goodman learned of Halston’s association with the lower-level retailer, they dropped his main line and other top-tier designers followed suit.

Due to his partying, Halston was fired from his own brand in 1984. Because of this, he no longer had the rights to design under his own name. He never regained control of his brand, but he did continue to design clothes in a reduced capacity.

Halston Renewed Interest in His Legacy

More than 30 years after his death, the name Halston is synonymous with American sportswear and iconic seventies fashion. The current interest in Halston story has been fueled by the Netflix limited series, “Halston”, produced by Ryan Murphy. The show depicts the rise of Halston’s career in the ’70s and ’80s and how his success was eclipsed by his excessive partying and glamorous lifestyle.