Fashion Trends Throughout the Years

At its heart, change is the very nature of fashion trends. Fashion is an important part of our daily lives as we decide what to wear to work, to school or for leisure time. Many style trends return again and again. For example, jumpsuits were first popular in the 1970s and have recently experienced a resurgence. Overalls made a strong comeback in 2020, after having a moment in the 1990s and an even earlier moment in the 1980s. Some trends never really go out of style. Denim jeans in various styles and Converse sneakers are forever chic. Here are some of the main American fashion trends from the last six decades.

Fashion trends in the 1950s centered on fitted silhouettes and elegance. The 1950s were fundamentally a time of conformity and people dressed very conservatively. During this decade, there began to be more style options for women to choose from including bright day dresses, ankle-length skirts and bathing suits. Women did begin to wear slacks and shorts to casual or outdoor affairs. For the first time, clothes were designed to complement swimwear. 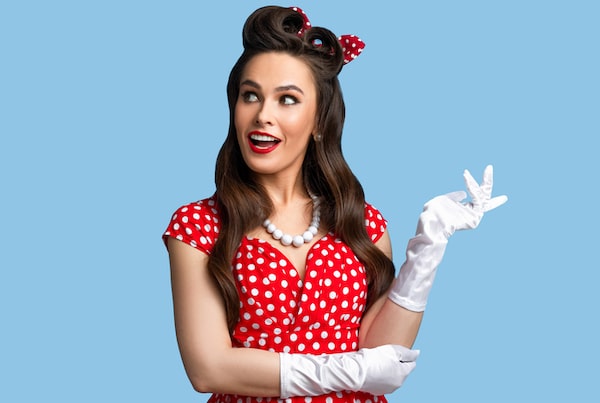 In the Swinging 60s, the silhouette of women’s dresses changed significantly. Dresses were straight fitting and did not highlight the figure. Women began wearing pants more regularly and the pants were high-waisted and had slim legs. Women embraced shorter hair.

As the decade continued, the mod style emerged on the American scene. Mod, short for modernism, was a whole new look. This subculture focused on fun, bright ensembles with polka dots, paneled dresses, short skirts and knee-high boots. Women’s hairstyles were all about short pixie cuts, bobbed styles, or long, straight hair parted in the middle.

In the 1970’s, people began to embrace more androgenous styles and the lines between male and female fashion began to blur. Hippie-style dresses were popular as well as bell-bottom pants, tunic tops and t-shirts. Women began to enter the workforce in larger numbers and started wearing pantsuits to mimic men’s office attire. However, they softened the look with silk bow blouses under their blazers.

During the last few years of the 1970s, disco culture became all the rage. The popularity of the film “Saturday Night Fever” inspired slinky dresses made for dancing, platform heels and designer jeans. Large collars, robes, culottes and leisure suits were popular.

Color was everything in the 1980s. Bright colors were important and neon clothing and makeup came into vogue. It was the “more is more” decade. Oversized clothing was the norm. Everything from dresses to blouses featured shoulder pads. Hairstyles were big and messy and earrings were oversized. Women wore bright spandex leggings with even brighter oversized tops.

With the introduction of MTV and music videos, fashion became a bigger part of American culture. Athletic wear was a major trend and sneakers became status symbols. Designer denim was popular in the eighties in acid washes and stonewashed finishes. Two other pant styles that were popular in the 1980s were stirrup pants and parachute pants. Stirrup pants were slim pants with a stirrup, or band of material, that encircled the bottom of the foot to keep the pants leg in place. Parachute pants became a fad as part of the popularity of breakdancing. The pants were made of ripstop nylon that resembled parachute fabric.

As the 20th Century ended, the bright exuberance of the eighties turned to the grunge fashion of the early 1990s. People began to value comfort over high fashion. Clothes were loose-fitting but not vibrant. Flannel shirts, plaid designs, and Doc Marten shoes were ubiquitous. As the nineties wore on, fashion became brighter with hip-hop style influencing American fashion as the music trend became more mainstream. In the later 1990s, people began to wear name-brand designer clothing and status clothing included large logos.

During the early 2000s, women’s clothing became more feminine again. Miniskirts, capri pants and low-rise jeans were in style. This decade is thought of as the “mash-up” decade as designers began to take inspiration from trends of the past. The styles of the early 2000s were focused on the midriff as low-rise jeans and crop tops exposed lots of the abdomen. Novelty items were embraced as fashion with trucker hats and tattoo-themed t-shirts leading the way.

In the 2010s, jean waistlines became slightly higher and the bootcut shape gave way to stretchy, form-fitting “skinny jeans”. The boyfriend blazer was big especially when it was paired with skinny jeans and flat shoes. The athletic/leisure wear trend led the decade with stylized yoga pants, sports bras and jackets.

Fashion can be thought of as an expression of individuality and creativity. The styles that are worn today are just a combination of all the trends from the last few decades. Currently, fashion is all about easy to wear choices and feel-good looks. After the trying months of the pandemic, people are looking for comfortable clothing and happy colors. Whether it is tie-dye, cashmere, fringe, or florals, the most important thing to remember in the upcoming fall fashion season is people should be their authentic self when choosing clothing.

This entry was posted in Fashion and tagged Fashion, Fashion History, Fashion trends. Bookmark the permalink.