Fashion Show History – A Look Back at the Catwalk

Fashion shows are some of the biggest and most popular events in the modern fashion world. Whether it is an in-person event with an audience of thousands or the show is broadcast online to a virtual audience of millions, fashion shows are a big-ticket business that showcase different fashion trends from throughout the years. However, that was not always the case. In fact, it might surprise some people that fashion show origins are a lot quainter than the bigger events of today.

The display of stylish clothes that is known as a fashion show originally started in the 1860s in Paris. This was around the time the legendary English fashion designer, Charles Frederick Worth, used live models instead of the often-used mannequins of the time. By the end of the 1800s, and the start of the 1900s, large gatherings known as “fashion parades” had begun to pop up in other major cities across the globe such as London and New York. However, these shows were always a very small, private affair only open to the wealthy in hopes of them buying the merchandise. In the beginning, photography was even banned to prevent anyone from stealing ideas.

Fashion Shows – Next Steps and a New Look

This version of fashion shows stayed largely the same until after World War II when design houses began to open their doors to anyone and everyone who could give them publicity and good word of mouth.

One of the major icons of this new era of style was Christian Dior, whose first fashion show in Paris in 1947 heavily featured billowing skirts flared out from a tailored waist. This style became so popular, so immediately, that it was given the name “The New Look” by the press. 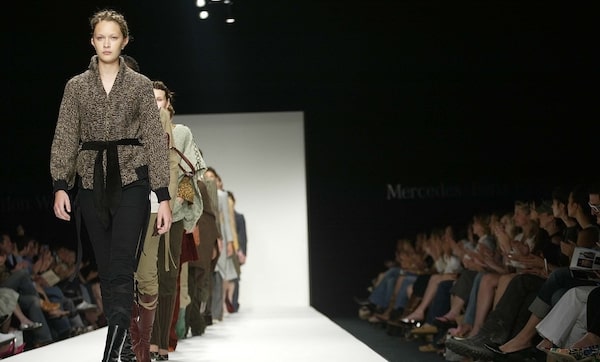 By the 1960s, fashion shows began to have a lighter feel. The serious faces of models walking in strict formation gave way to events with more personality and featured music. Designers also began breaking away from rigid spaces and were more inventive with location and setting. In the 1970’s, ready-to-wear took over from haute couture and the catwalk truly became the place for collections by designers to be showcased to the public. In the 1980s, fashion shows became big stage productions with full music, sound effects, intricate staging and lighting.

Fashion Shows – The Next Level

By the 1990s, Yves Saint-Laurent took the fashion show to the next level with a runway show in a sold-out stadium. This show was one hour before the World Cup final between France and Brazil. This huge production changed the fashion industry and featured 300 models, 900 backstage hands and over 4000 stadium staff. Over 1.7-billion people watched the broadcast.

The nineties were also the decade of the supermodel as catwalk shows became true visual spectacles. This period was before the rise of social media so the shows were more elitist and exclusive than they are now. Designers really began to stage lavish shows in an effort to one-up the other artists.

Fashion shows have become more and more ambitious in recent years. They are often theatrical presentations that involve artistic displays, music and experiential elements. Some prime examples of these types of shows were put on by the influential late British designer, Alexander McQueen. McQueen created a life-size super model chess set, put a runway in a wind tunnel and ended a show with a masked Joan of Arc surrounded by fire effects. To highlight the modern scope of fashion shows, one has to look no further than the work of late designer, Karl Lagerfeld. Lagerfeld created entire fake supermarkets for fashion shows and even used the Great Wall of China as a catwalk.

From the meager beginnings of fashion displays with garments on mannequins to the introduction of fashion parades that featured live models to audio-visual spectaculars, the fashion show has always been a spectacle. Without the creative freedom of pioneers like Charles Frederick Worth and Yves Saint-Laurent we would not have the fashions shows we enjoy today.

Fashion Shows and the Future

For several decades now, the fashion show has been a pop-culture staple with fashion events capturing the interest of millions as designers present their newest work. Models have become celebrities themselves and stars crowd the front row to be the first to see the new looks and, of course, to be photographed at the “in” event.

The future of the fashion show is undetermined. The future could see the embrace of new technologies that some fashion brands have just started to touch on. Designers are beginning to utilize digital technologies and explore issues around ethical production, consumption and sustainability. Fashion designers have a role in reflecting society and certain moments in time. What is certain is that change will come and designers will need to be on the cutting edge of how society and attitudes are changing. Whatever the future of fashion shows, it will most certainly be fascinating to watch.